Earlier in the year we wished May the Fourth Be With You, and now for some reason Star Wars flags are back on our minds…

London-based New Zealander Scott Kelly’s labor of love — to design a flag for the “around 300 planets named over all of the Star Wars universe, from movies to comic books to video games” — has been getting a fair amount of attention given the media’s boundless hunger for all things Star Wars related as western culture revels in The Force Awakens release-o-mania. Kelly is currently at 103 flags and counting, each flag with a page explaining its design at www.flagsofthegalaxy.com. These are all pretty good designs, as The Guardian reports:

He said his “loving interpretations” observed the basic rules and traditions of flag design, including the canton, chevron and 2:3 ratio, and drew on each planets’ individual attributes.

Kelly’s project is actually independent of the flag designs that have appeared in the movies, “extended universe”, etc.  This is interesting, given that he says Wookieepedia was his primary reference — but apparently not Wookiepedia’s collection of images of flags and banners.  Indeed, a number of the planets Kelly designed for already have flags, in this sense.

For example, here is the flag for Tatooine, as it appeared (without further explanation) in Star Wars Galaxies: An Empire Divided.

And here is Scott Kelly’s version: 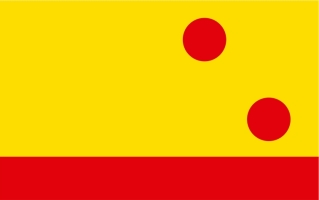 Kelly also provides a lengthy explanation for this design:

Tatooine was a desert world and the first planet in the binary Tatoo star system. It was part of the Arkanis sector in the Outer Rim Territories. It was inhabited by poor locals who mostly farmed moisture for a living. Other activities included used equipment retailing and scrap dealing. The planet was on the 5709-‐DC Shipping Lane, a spur of the Triellus Trade Route, which itself connected to the Sisar Run. The planet was not far from the Corellian Run. It had its own navigation system. The two acute circles represent Tatoo I and Tatoo II, the two suns which Tatooine orbits. As the suns have such a significant effect over the physical features of the planet and its economic place in the galaxy the two acutely angled circles have come to be the biggest signifiers of the planet. The red strip along the bottom of the flag, represents the rule that the Hutts Lords have over large swarths of Tatooine. The yellow is the primary identifying colour of Tatooine. This association is due to thousands of years of travellers mistaking Tatooine for a sun due to its desert appearance and the bright reflection from the two stars it orbits.

And in this case, and several others, he has manufactured his design, and then “aged” it to give it the classic Star Wars grungy look (that was so much missed in perfect CGI artifice of the cursed prequel trilogy):

Here are some other examples to compare the flags from existing Star Wars media (right column), and Scott Kelly’s interpretations (left column).  These flags are for Dantooine (top row), Endor (middle row), and Naboo (bottom row).

As flags, Kelly’s designs are fairly simple and legible.  But do they feel like they belong in the Star Wars universe?  In that regard, are they more or less successful than the designs on Wookiepedia?  Let us know what you think in the comments below.

As a postscript, it turns out Scott Kelly has been designing flags for Middle Earth as well: at least, for its cinematic stand-in, Kelly’s homeland of New Zealand.  These five designs were submitted to this year’s design contest for a new Kiwi flag.