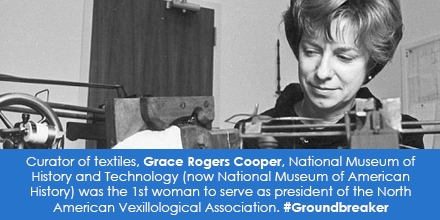 In 1972 the Smithsonian Institution published this book by former NAVA president Grace Rogers Cooper, Thirteen-Star Flags: Keys to Identification. It contains a wealth of information on the early history of US flags and surviving examples, and how to detect impostors. And the public domain full text is available online!

You can read it on the Smithsonian website or download the PDF from our site, for convenience.

Cooper (1924-2004) was an important American vexillologist and textile expert, serving as a curator at the Smithsonian Institution. She was the first woman to serve as NAVA’s president from 1983 to 1986, and went on to edit NAVA News from 1987-1995.