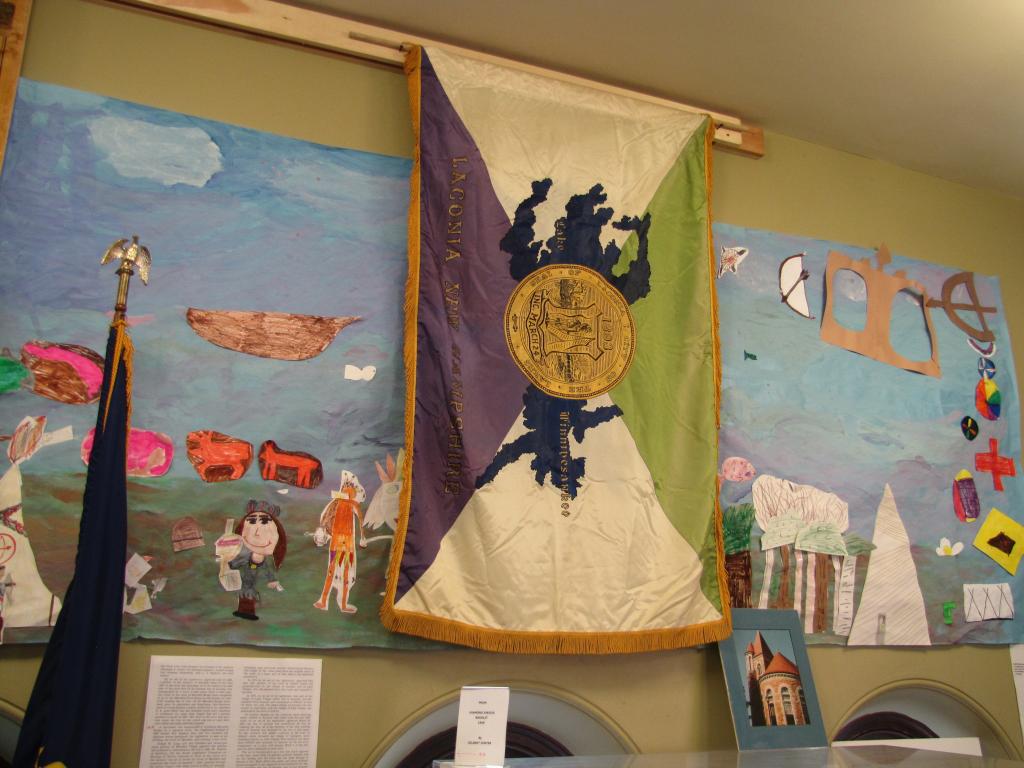 Situated between lakes Winnipesaukee and Winnisquam, the small New Hampshire city of Laconia has technically had a flag since 1965.  Technically, but not really in practice, as the Laconia Daily Sun notes, “a facsimile flag is encased and hangs on the wall in the Laconia City Council chambers, but that really is the extent of the functionality of the city’s current flag”.

According to city code this is Laconia’s current flag:

The “facsimile flag” on display in council chambers is a bit different:

In fact, the facsimile flag does not appear to be a flag at all, but more of a poster.  With a bit more digging, we found evidence that at least one actual flag had been made:

The obscurity of the Laconian flag is coming to an end, however. Local vexillonaire and entrepreneur Bree Henderson (of the Polished & Proper Barbershop & Shave Parlor), inspired by Roman Mars’ TED Talk, asked the city to sponsor a redesign contest late last year:

Bree Hendersen [sic], a resident in Ward 4, addressed the Council regarding the lack of exposure of the City flag within the City. The City flag is 50 years old, adopted by the City Council in 1965, and has not been raised on flag poles throughout the City as it should be. B. Hendersen reviewed some historical information about the flag and questioned if the City flag is useful to the meaning of the City and suggested that a well-designed and used City flag could assist with the identification of the City. The elements of a flag, such as that of the City of Chicago, is a great example of what a well-designed flag can do. B. Hendersen proposed the idea to have a contest to redesign the City flag to be a better tool for the community. Councilor Lipman noted that this is a great idea and thanked B Hendersen for coming forward. (From the city council meeting minutes of 9 November 2015)

Less than a year later, the contest to redesign the flag was launched today.  Prizes of $500, $300, and $200 will be awarded the top three designs. You have until Labor Day (5 September) to submit your proposed design at the Laconia Public Libary or by emailing laconiacityflag2016@gmail.com. For more information, visit the City Flag of Laconia Facebook page.

If all goes well, Laconia should have a fine laconic flag by the end of the year — particularly if designers make use of the guidelines in the itself laconic Good Flag, Bad Flag.