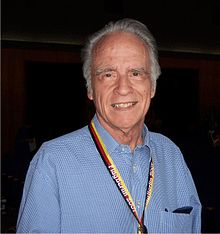 A: This man coined the word vexillology and helped organize flag studies into an global research community of that name.

Q: Who is Dr. Whitney Smith?

Today is Whitney Smith’s 76th birthday.  He was born 26 February 1940 in Arlington, Massachusetts to a family of teachers and became fascinated as a child of five or six by the many flags he saw around him at the end of World War II.  He asked his mother about them, and school teacher that she was, she encouraged him to learn for himself from dictionaries and books.  This led to a fateful discovery:  he’d need to do the research himself!  In an interview with Encyclopaedia Brittanica (for which he wrote over 290 articles) he said:

When I discovered how many flags there were, I wanted to learn about all of them, but most of the books then available were not very helpful, and there were actual contradictions in what they said.  That got me working on the question of what the real answers to my questions were.  In a sense that has continued right up to the present day.

At the age of 18 he published a two-page article, Flags of the Arab World, in the journal The Arab World.  The word vexillology appears for the first time in its first sentence: “One of the most interesting phases of vexillology — the study of flags — is the important contribution to our heritage of flags by the Arab World.”

In 1961, the year he graduated from Harvard, he co-founded The Flag Bulletin, the first flag studies journal. (The first issue was published 1 October 1961.) As a graduate student in American history at Boston University, he established the Flag Research Center in Winchester, Mass. (1962), co-organized the first International Congress of Vexillology  (ICV) in Muiderberg in the Netherlands (1965), and founded the North American Vexillological Association (NAVA) in Boston on 3 June 1967. In 1968 he received his Ph.D. in political science with a dissertation entitled Prolegomena to the Study of Political Symbolism, and went on to teach on the faculty at Boston University for a couple years before dropping out of mainstream academia to focus on his research center, NAVA, and vexillology.

Both the biennial International Congresses of Vexillology and annual NAVA meetings are still going strong:  NAVA 50 will take place 14-16 October this year in San Jose, CA; and ICV 27 on 7-11 August 2017 at Imperial College, London.  The Flag Research Center is no longer an independent business, but has been incorporated into the Trust for Vexillology, a nonprofit supporting the Smith Collection at the Briscoe Center in Texas.  His Flag Bulletin ceased publication with its 233rd issue.

Though well-known and well-liked in the vexillology community, Whitney Smith kept (and keeps) a low public profile.  One peek into his life occurred in a 1985 People Magazine story that portrayed him as a thoughtful eccentric:

“I’m a monomaniac,” he says, “that’s clear. But I’m more fortunate than most people because I have something that infuses my whole life. I relate flags to everything.”

(Indeed, a beauty of an interdisciplinary pursuit like vexillology is how it connects to so many topics and perspectives.) The article goes on to explain that being a monomaniac who is really, really into flags does not necessarily mean being an ultra-patriot or flag worshipper:

It would be wrong, though, to assume that Smith is a flag-waver. While he professes genuine excitement about the individual liberties the stars-and-stripes represents, his passion for the American flag, or anyone else’s, is scholarly and not chauvinistic. He was appalled by an old Texas law that allowed a judge to sentence an offender to 25 years in prison for flag desecration. “Our flag stands for freedom,” he says. “The most fundamental desecration of the spirit of the flag is to limit what can be done with it.” To make his point, Smith once appeared as a defense witness for a teenager in Massachusetts who was arrested for sewing a flag to the seat of his pants and sentenced to six months hard labor. “I have always prided myself on being a pragmatist,” Smith explains. “I want to understand why people are emotional about flags. But I want to have an outside perspective. Essentially I like to think of myself as a Martian, one who has no prejudices, who comes to earth and sees some cloth on a stick and notices that if you step on it, people get angry.”

Whitney Smith is retired now; his vast collection of flag-related materials was donated to the University of Texas at Austin in 2013. It is now housed as the Dr. Whitney Smith Flag Research Center Collection at the Briscoe Center for American History.  (Photographs of some of the materials were included in the press release announcing its formation.) The collection is currently being indexed, so the Briscoe Center at present only provides a list of subjects covered:

So today, his 76th birthday, let’s thank Whitney Smith for giving us this still nascent field of vexillology by going out and advancing the field by researching, designing, collecting, promoting, or just sharing your interest in a flag!