Moonwalk is one of Andy Warhol’s last works, produced shortly before his death in 1987 and never signed.  There are two regular edition versions, one in yellow, one in pink.

There were also 66 trial proofs, each unique. One example:

It is easy to think that this is Warhol drawing and painting over a famous NASA photograph from Apollo 11, but this would only be partially true.

Neil Armstrong did take a famous picture of Buzz Aldrin standing next to the flag on the moon — but Aldrin is shown in profile, and to the right of the flag.

So Moonwalk has behind it a story of artistic liberties, some taken by NASA, many more by the pop artist.

There is another story unfolding about this iconic flag image by Warhol/NASA.  A year after Warhol’s death, Chris Murray’s Govinda Gallery donated Moonwalk screenprints to a charity auction for the Challenger Center for Space Science Education in Houston.  Aldrin and his wife Lois attended the event, and Murray ended up giving them one of the yellow screenprints.  At the end of this month, Lois and Buzz Aldrin will be auctioning off their copy. 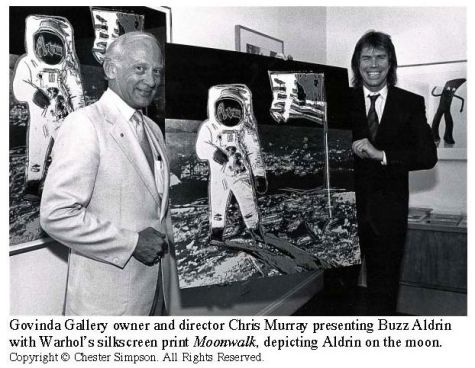 2 thoughts on “Andy Warhol, NASA, and the Making of “Moonwalk””