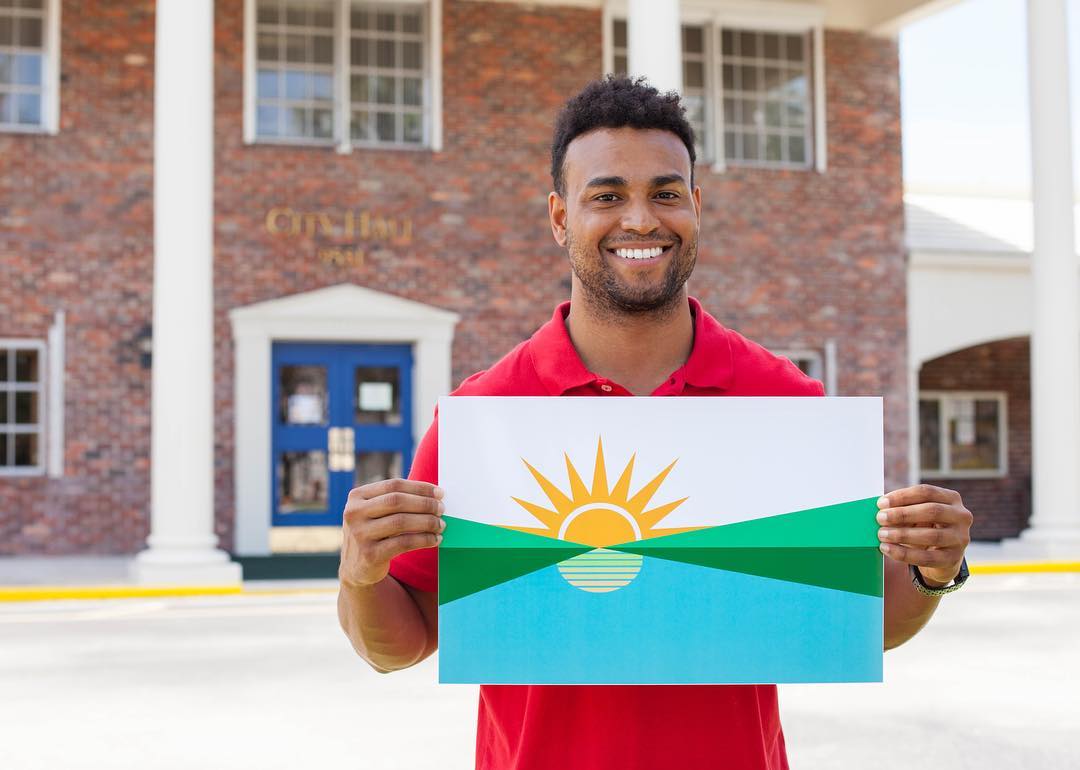 The city received 80 submissions to the contest and narrowed the field to these six finalists:

Like many such contests, Coral Springs’ referenced Roman Mars’ TED Talk and the Good Flag, Bad Flag guidelines. (Though somehow rule 3 turned into “Use basic colors: Flags wear over time, and using basic colors ensures a long lifespan. Limit yourself to 3 colors from a standard 10-pack of markers.” It’s unclear that “basic colors” wear any less quickly than others, as wear is a complicated dye-dependent photochemical reaction.)

Unfortunately, contradicting the above, it also promoted the use of the “palette of colors … approved for the cities [sic] branding”:

Furthermore, the judges apparently disregarded the importance of simplicity in flag design by passing over a number of simpler submissions in favor for the more complex designs in the six finalists.

Here are some of the other simpler submissions deserving, in my opinion, of at least an “honorable mention”.

Nathaniel Aymer: “This flag symbolizes the motto “Everything under the sun” elegantly with the same refreshing color palette used with the City Of Coral Springs. It is very simple but very distinguishing.”

Andres Franky: “The flag represents the breathtaking Everglades’ sunset that the city is lucky enough to have in its own backyard.”

Kenneth Ariza: “Inspired by the city slogan, “Everything under the Sun”. And by the Everglades that is close to home. The design is simple and modernistic. The half yellow circle symbolizes the sun setting behind the green stripe that symbolizes the Everglades. The bottom blue stripe symbolizes our surrounding oceans. The hues were chosen from top to bottom in order for the exterior colors to blend in nicely in the center. It gives the flag a gentle flow from a warm colored sun to a cool blue tone. From a distance it is easy to depict that the flag portrays a city that cares about its environment.”

Nicole Utrera: “The shapes are supposed to represent the ground, sky, and sun with the rising ground symbolizing how Coral Springs is growing as a city.”