Long-time PFA member Michael Orelove is recovering from a medical emergency. We will miss having his good-natured enthusiasm at our meetings, and wish him a full and expeditious return to health. Here is a photo essay he put together for our most recent newsletter.

When I take a trip, I pack clean underwear, my toothbrush, and some flags.  I also pick up more flags along the way.  In October Kathleen and I took a 10-day cruise through New England and Canada on a Holland America ship. 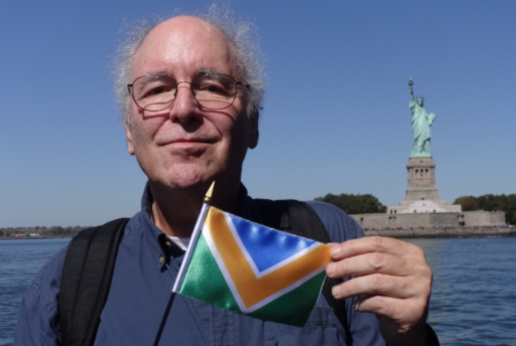 New York: Portland Flag Association flag…Our flag gets around. “Give me your tired, your poor…” 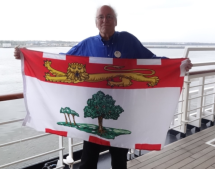 Rockland, Maine: Rockland Yacht Club burgee…When we got off the cruise ship in Rockland I saw the Rockland Yacht Club. Since I don’t have its burgee, Kathleen took my photo so I could send the club an image with a request for an old burgee.

Nova Scotia: Nova Scotia flag…The province has over 160 historic lighthouses. Peggy’s Point Lighthouse is one of Nova Scotia’s best-known lighthouses and may be the most-photographed in Canada. Located in the quaint fishing village of Peggy’s Cove, the lighthouse was built in 1915.

Boston: Portland (Oregon) city flag…The Samuel Adams statue in Boston represents the Revolutionary patriot, clad in the citizen’s dress of the period, standing erect, with folded arms and a determined look in his finely-chiseled face. It’s a fitting backdrop for the Portland city flag, given that our last mayor was named Sam Adams.

Aboard the Eurodam: Boston city flag…Holland America presented me with a city flag of Boston (or should I say “Bostonia”?) as we sailed away.

I use the flags that I acquire on these trips, as well as those sent me by governments and other entities, when I give flag talks to school and community groups.