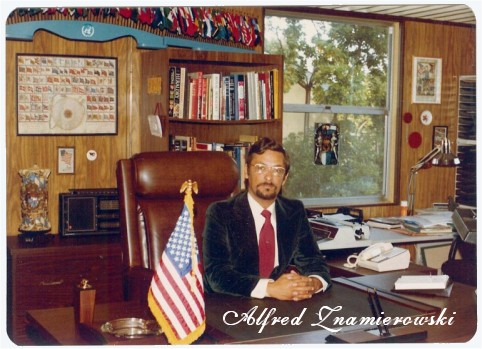 With deep pain in our hearts, we announce that on October 23, 2019, at about 1:00 a.m., nowadays the best vexillologist in the world, Alfred Znamierowski, died at the age of 79 in Prague, the Czech Republic. Apart from vexillology, he was one of the world leading heraldists and sphragists. He also worked in the field of politics and culture; he was also a journalist.

Alfred Znamierowski was born on 21 June 1940 in the then-General Government of Warsaw. His views and thinking were not formed by his communist father but by his grandfather Czeslaw Znamierowski, a Polish jurist, sociologist, and professor of philosophy at the University of Poznan.

Alfred Znamierowski studied geography at Warsaw University. In 1965 he was given the opportunity to go to Italy and then to France, where in 1966 he gained the status of political refugee. Next he moved to Munich, Bavaria, where he started to work as an redactor of Polish section of Radio Free Europe. There he also made a friend with a Czech singer and songwriter Karel Kryl. Although Karel Kryl came from Ostrava and spoke very good Polish, he was not a native speaker so Alfred Znamierowski corrected and translated some of his song lyrics. Thanks to him Karel Kryl released one long-play record in Polish.

During the work and stay in the Federal Republic of Germany Alfred Znamierowski cooperated with Dr. Ottfried Neubecker, who was, as Alfred declared, his mentor of heraldry and vexillology. After 12 years working in the Radio Free Europe, he moved to the United States where he worked for 11 years for the government radio Voice of America. Before that, he had established the Flag Design Center in San Diego, California, where he designed and produced flags. He began to work with American vexillologist Dr. Whitney Smith and contribute articles to various vexillological journals. (He had written for many Polish magazines before.)

I personally corresponded with him since about 1983, and we first met in 1990 after the fall of the communist regimes in Central and Eastern Europe in summer of 1990 with another well-known Polish vexillologist Andrzej Beblowski. As a representative of Polish emigration in the USA, Alfred Znamierowski had contact with U.S. president Ronald Reagan several times.

He advocated a hard line against communism and socialism, but on the other hand he was a democrat and a humanist. In 1995, he was the main organizer of the International Vexillology Congress (ICV 16) in Warsaw, the first such event in the Eastern Europe (where before 1989 countries had been under the influence of the Soviet Union).

He wrote over twenty books on vexillology, heraldry, and sphragistics in Polish and English, many of which were translated into many world languages. He also published books concerning global and Polish politics. He spoke about 10 languages. Apart from Polish, English, German, French, and Italian, his Czech was quite good because his father had been General Consul of the Republic of Poland in Bratislava and then in Czechoslovakia.

I am very proud of that Alfred Znamierowski was a friend of mine and that I was able to provide him a lot of illustrations and other materials (e.g. Law texts from the Collection of Laws, actually all countries of the world). Unfortunately, the latest book he worked on has not been finished (Flags, Coats of Arms ,and Seals of the United States of America and its individual states and territories). In the early evening just before his death, we were collecting materials for that book from my archive. However there was so much and we decided to finish it following day. Unfortunately, it was not possible because Alfred had died at the night before.

Alfred Znamierowski had been married five times (all his wives were Polish) and he was just preparing for the sixth marriage. He had an only son, Christian, who lives in the United States in Virginia, not far from Washington, D.C.

The Republic of Poland transported Alfred’s mortal remains to Poland and organized a state sepulture. He was buried in a family tomb at Powązki Cemetery in Warsaw.