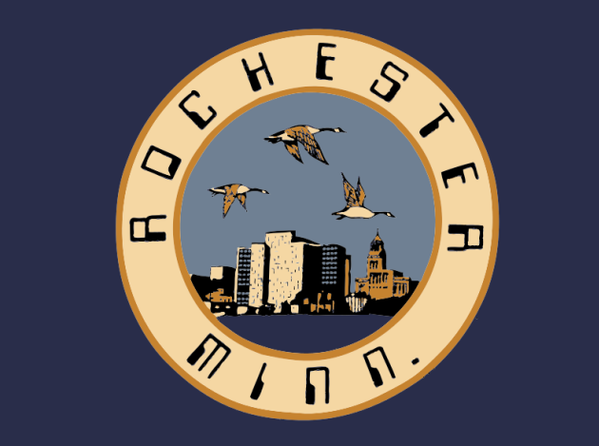 The Rochester Flag Project, a community organization in Minnesota seeking to change the Rochester city flag, is soliciting designs at rochesterflag.com/contest.

Interestingly, they are hosting two rounds of design submissions this year — the first round ends August 18, and the second will run from October 16 to November 17. And each round will result in up to 6 contest winners: 1st, 2nd, and 3rd prizes (with awards of $75, $50, and $25), one set based on evaluations of judges, and another on evaluations from a public survey.

Also noteworthy is the involvement of Lee Herold and his Rochester-based flag store Herold Flags (heroldflags.com) as sponsors of the project. This is not the first redesign effort Herold has been involved in — he is proposing the North Star Flag to replace the current Minnesota state flag. Herold also serves as Treasurer on the Executive Board of the North American Vexillological Association, NAVA.

Here are the first two submissions, from postings on the project’s Facebook page facebook.com/rochesterflagproject. (The project has purposely anonymized them so they will be judged on the merits of the design, not the designer.)

In 1980 a competition was held to design a flag for the city of Rochester. Nearly 200 flag proposal entries were submitted to the citizen flag selection committee. The design submitted by Laurie A. Muir, a fine arts student at the Minneapolis College of Art and Design, was selected for the official city flag by the Rochester City Council at a council meeting on June 16, 1980. Muir designed the flag with a white circle on a royal blue background, as a historical reference to the original Flag of Minnesota, which actually has a medium blue background. To represent the city’s main industry, the flag design includes a city landscape in the background showing the main building of the Mayo Clinic, along with the Plummer Building, a U.S. National Historic Landmark. Another major employer, IBM is represented by a computer-styled font for the lettering. In the foreground is a blue lake representing Rochester’s Silver Lake, an artificial lake in Rochester created by a dam and used to cool the electrical generating power plant. Because the power plant produces enough heat to keep the lake from freezing in the winter, Canada geese stay in Rochester year round. This is represented by the three Canada geese flying over the city on the flag. The first official flag was presented to its designer in a ceremony held at the Rochester Public Library on August 19, 1980. Making the presentation was City Council President Dick Postier and Mayor Chuck Hazama. The center image from the flag is currently used as a logo in various renditions by city departments.

The Rochester effort is one of 80 such Municipal Flag Improvement efforts we’re tracking.