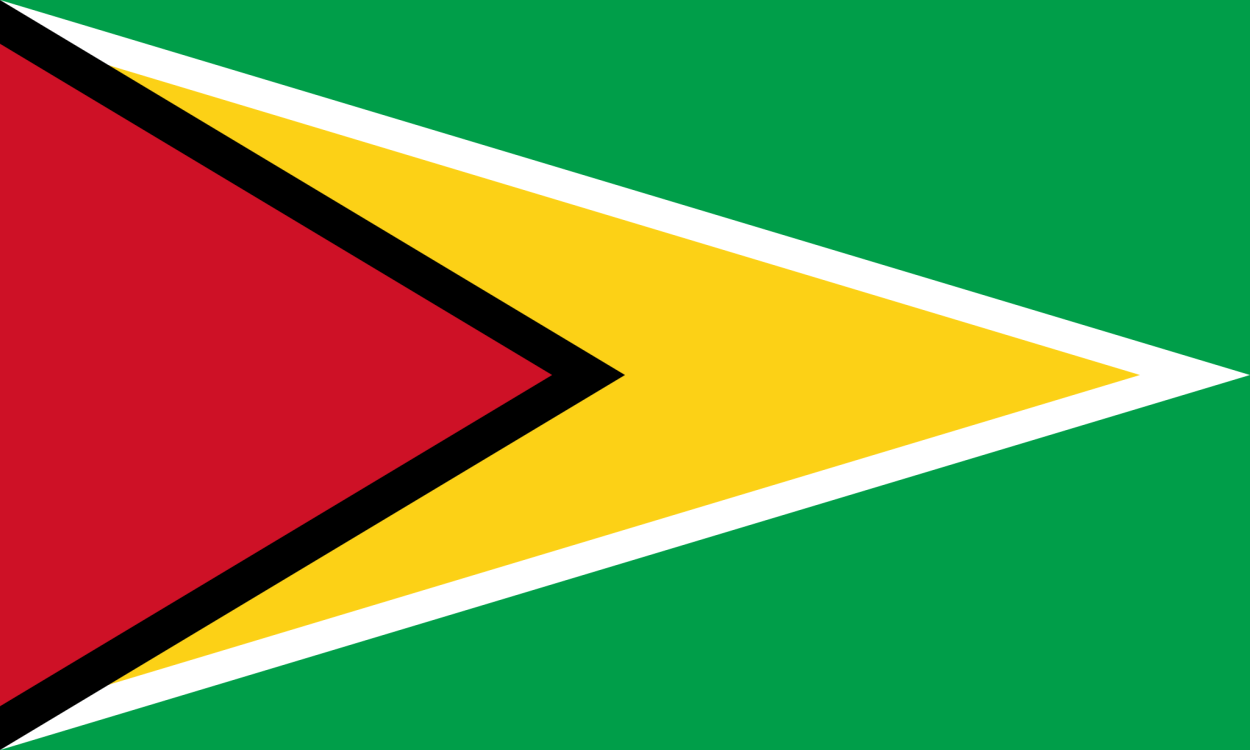 The last issue of The Flag Bulletin (Number 233, July 2008-October 2011) is titled Celebrating 50 Years of Vexillology and commemorates the launch of the Bulletin–the first flag studies journal–on 1 October 1961.  More specifically, it is a celebration of the life of Whitney Smith, upon his retirement, through a long series of personal recollections of his friends and family.

One of these is by his sister, Sybil Smith, and includes a story about how Whitney Smith learned that his design for the flag of Guyana had been selected, and what happened then:

When Guyana showed signs of political upheaval Whitney designed a flag for them and our mother stitched up a prototype and Whitney sent it off. It wasn’t until years later that Guyana adopted a new flag that looked similar to the one he had designed. Writing to the powers that were in charge, he questioned the origin of their new flag only to find out they had been looking for him. It was then that we started calling our mother “the Betsy Ross of Guyana.” Whitney was later invited to Guyana’s Independence Day celebration. They were slightly surprised to find out he wasn’t a native, but rather a white American. An invitation from The White House came from President Lyndon Johnson when he hosted a luncheon in honor of the Prime Minister of Guyana. Whitney was sort of low man on the totem pole seated at table #10 with the president of the Stock Exchange and others, but table #10 was right next to table #1 where the president and prime minister sat. 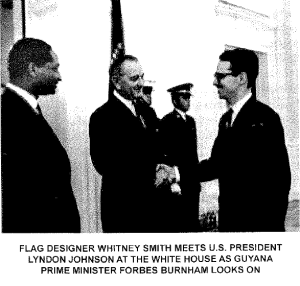 The Guyanese flag’s entry in the Flags of the World database gives some addition context.  In anticipation of British Guiana achieving independence in 1962 an international flag competition was held, to which Smith submitted this design:

The actual flag issued  by the British College of Arms for Guyana’s independence in 1966 has this design: 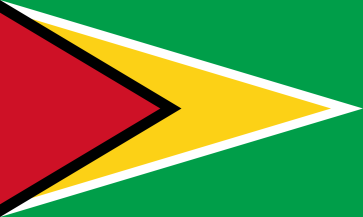 In Smith’s original design, the red and the green altered their positions. I believe that it was because that those who participate in a contest want to win the contest. Smith made his design prevaling the red color according to the leftist inclinations of the premier Mr. Jagan (a ethnic Indian pro-Soviet). The design of Vaclav Kalikova also show a gold triangle (but single) from hoist to fly and rest is green (and a blue star is in the yellow triangle). Perhaps the College of arms made a mixture of both designs. I believe that the five colors were in fact requested by the government (I read it) but I don’t remember if for Mr. Jagan or Mr. Burham. The fimbriations are against the heraldic principles and it is strange that the College of Arms (always precise) added unnecesary fimbriations.

To give Whitney Smith the last word, here is the entry for Guyana from his book Flag Lore of All Nations:

In 1960 the author of this book sent a flag design to Prime Minister Cheddi Jagan of British Guiana, who added it to the many other proposals received. When the British finally agreed to independence for their colony, the author’s flag design was slightly modified. Parliament officially adopted it, and when Guyana became independent on May 26, 1966, the flag was first officially raised. Green stands for the jungles and fields, white for the many rivers of Guyana; black is for perseverance, and red for nation building. The golden arrowhead [the flag’s nickname] symbolizes a thrust forward toward a golden future for the country and recalls the original Indian inhabitants of Guyana.